Using a new line of mice that express a synaptic membrane receptor with a fluorescent tag, researchers have tracked changes in the strength of synapses across the brain over several days. The method could shed light on altered synaptic function in people with autism, and the neural mechanisms responsible for the condition’s traits.

Synapses are highly dynamic links between neurons that can strengthen or weaken over time depending on use, a process known as synaptic plasticity. For instance, when neurons are stimulated, synapses between them increase in size and recruit proteins called AMPA receptors to the cells’ surfaces.

Researchers have traditionally visualized plasticity in living mice by injecting a plasmid that carries the gene for a fluorescently tagged version of the AMPA receptor into neurons, causing those neurons to express the tagged receptor. Microinjecting DNA into neurons, however, is time consuming and inefficient, conferring receptor fluorescence to only a few neurons. In addition, injected cells overexpress the gene, which can alter the receptor’s function.

The new mice, developed by Richard Huganir and his colleagues at Johns Hopkins University in Baltimore, Maryland, make it possible to visualize AMPA receptors across the entire brain. The team genetically altered mice to fuse the animals’ AMPA receptors to a fluorescent tag. The tag is pH-sensitive and lights up only in the neutral environment of the cell surface, not in the acidic cell interior. As a result, only receptors on the cell membrane are visible.

When the researchers electrically stimulated neurons in slices of brain tissue from the mice, the fluorescence increased, as expected. Measuring the electrical excitability of the neurons, using a method known as patch-clamp recording, confirmed that the fluorescent signal correlated with functionally stronger synapses. 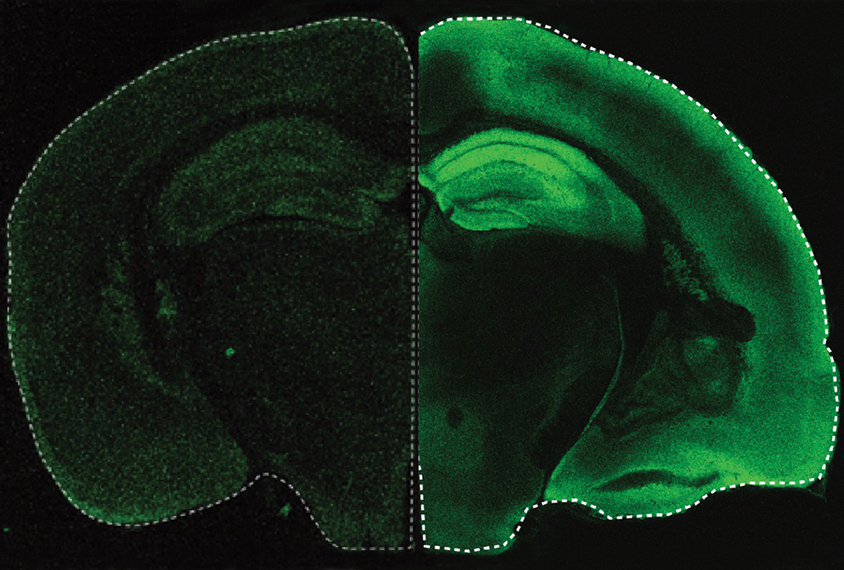 Green glow: A fluorescent tag that lights up proteins in synapses enables researchers to measure shifts in the strength of neuronal connections over time.

By surgically replacing the top of the animals’ skulls with transparent material, the researchers gained a window into the cerebral cortex. High-resolution fluorescence microscopy revealed a constellation of millions of synapses in exquisite detail. The team developed an algorithm to detect and measure the fluorescence at each synapse within the voluminous dataset, with an accuracy comparable to expert annotators but that yields results in a fraction of the time.

Huganir’s team also tracked changes to the same synapses before and after stimulating the rodents’ whiskers — a manipulation that increases synapse strength in a precise region of the somatosensory cortex, previous work has shown. As expected, whisker stimulation boosted fluorescence in the same brain region in the new mouse line, indicating that the synapses had strengthened by recruiting AMPA receptors to the neurons’ surfaces. The findings were published in October in eLife.

In unpublished work presented virtually in November at the 2021 Society for Neuroscience conference, the mice underwent fear conditioning, learning to associate being in a particular cage with a mild electric shock. Using a deep-learning-based system, the group could see receptors being added to synapses each time the animals were imaged over a two-week period, confirming that their learned fear response depended on synaptic plasticity.

The ability to image individual synapses across whole brain regions has promising implications for autism research, says Huganir, professor of brain science and psychological and brain sciences. Several genes linked to autism regulate synaptic plasticity. Variations in these genes are thought to disrupt the strength and abundance of synapses, leading to large-scale changes in neural connectivity. Despite the heterogeneity of autism, various forms of the condition converge on a common pathway involving altered synapse homeostasis.

The approach could also yield clues about the molecular basis of autism traits, including altered social communication and sensory perception. Because these differences involve communication among multiple brain regions, imaging across the entire brain is crucial to understanding the pathways involved, Huganir says.